The number 1 tour for our clients, all included in the incredible archaeological site of Tikal.

NOTE: You decide when to go back to Guatemala

THAT WE DO NOT INCLUDE

Drinks at the restaurant

WHAT’S WAITING FOR YOU!

Visit one of the largest and most important Mayan sites in Central America. Your day will start very early; remember, your flight leaves at 6 am so try to arrive at the airport an hour and a half before. After a one hour flight you will arrive at the Flores International Airport. Your guide will be waiting for you at your departure with a sign of Tikal Go.

Once we are in the Park let your imagination fly, we will enter a mysterious world where there are more than 3000 structures and only 30% of them are discovered. We will tell you how the Mayas lived as we will pass by the Palaces of the Mayan Aristocracy, we will show you what were their values, their structure, their religion. We will arrive at the Central Park where you will see the spectacular Pyramid, symbol of Guatemala: The Great Jaguar and you will be able to climb the Temple of the Masks: Temple 2. Then we will continue our tour in The Lost World to understand where the City began and the accuracy of calculation of the ancient civilization. But it doesn’t end here! We will end the tour by climbing one of the highest pyramids in the world: Temple IV, with a height of 64 meters, which has been used as a stage for several films, one of them the first Star Wars movie of 1977, as well as the eleventh James Bond movie of 1979.

After 3 to 4 hours of tour we will end up enjoying typical Guatemalan food in the best restaurant of the Park.

Discover the history of the Mayas and get into their culture where science, mathematics, wars, arranged marriages between families, religious sacrifices and their impressive capacity to build make us understand how this civilization was one of the most important in the history of mankind.

* This tour can be customized, check out our packages.

Up to 48 hours before the date of the start of the trip we will re-schedule everything free of charge. If it is later we have a penalty of USD 115 for re-scheduling 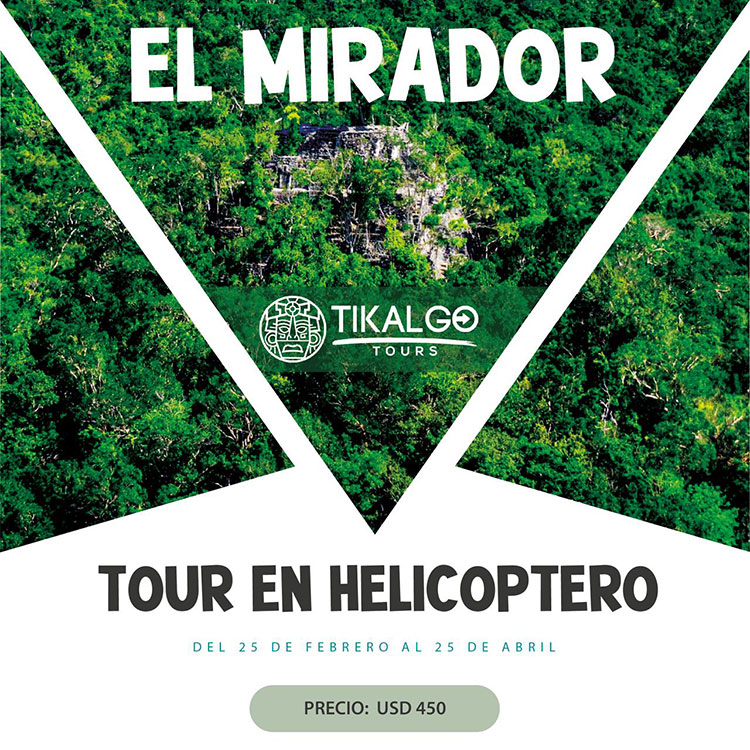